The half-kilometre distance between Entrée Ecole and Carrefour Vietnam, is being carried out through direct labour, using paving stones.

The joy of inhabitants of Abobo-Messa, a neighbourhood in Oyom-Abang, Yaounde 7 Sub-divisional Council in Mfoundi Division of the Centre Region, now knows no bounds. Their hitherto impassable area will soon open up to vehicle traffic following the recent launch of the paving of a 550-metre-long road by the Council in conjunction with the Direct Labour, HIMO Unit of the Ministry of the Economy, Planning and Regional Development, MINEPAT.

Jean Claude Tsila, Senior Divisional Officer, SDO for Mfoundi, who chaired the ceremony, handed over some tools to workers and visited the project site where he placed paving stones on the road to flag off the project. The SDO told the people that the project will help in the transfer of skills for the Council to henceforth carry out similar projects on its own. Mayor Tamba Augustin of Yaounde 7 Subdivisional Council recalled that he promised the residents of Abobo-Messa two years ago that something was going to be done about the bad road and has fulfilled his promise. He said the road will be of great service to local people.

“Before now, the area was a disaster zone, so inaccessible and in advanced state of dilapidation. We are grateful to government for accepting to carry out the trial phase of road construction using paving stones in our council area,” the Mayor explained. He added that the project will cost 145 million FCFA and work has already started. Kouatchou Medard, Head of HIMO Unit in MINEPAT, disclosed that work will consist in reconstructing the bridge over Abiergue Stream, cleaning the banks of the stream and paving the distance of 550 metres.

Gutters and sidewalk balusters will also be constructed. Already, the stretch has been graded and the production of paving stones is going on. The project is expected to last seven months, making use of about 120 semi-skilled and unskilled labourers. 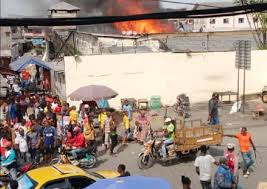