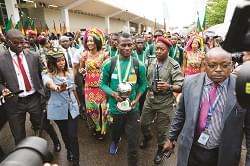 The Cadet Lions arrived at the Nsimalen International Airport at 11:00 a.m. yesterday April 29, 2019 on board an Ethiopian airlines flight.

It was a huge crowd that turned out to welcome home the players and officials of the national U-17 football squad yesterday, April 29, 2019 at the Yaounde Nsimalen international Airport following their victory at the just-ended Total U17 Africa Cup of Nations in Tanzania. The Cadet Lions beat Guinea 5-3 on penalties in the final in Dar es Salaam on Sunday April 28, 2019 to lift their second trophy after i6 years. In this light, the players were given a hero’s welcome as they landed back on home soil.

The U-17 Lions arrived at the Yaounde Nsimalen Airport at 11:00 a.m. on board an Ethiopian Airways flight. As early as 9:00 a.m. fans, relatives and well-wishers thronged the premises of the airport waiting anxiously for the arrival of the U-17 Lions after their successful campaign. Dance groups could be seen in strategic spots chanting praises to the players.

Despite the rain the public that turned out massively, held on impatiently in order to have a glimpse of the trophy. After alighting from the plane, team captain, Fabrice Ndzie Mezama brought in the trophy to the VIP hall at the Nsimalen International Airport where it was highly applauded by top officials and journalists.

After the official ceremony and interviews from journalists, the trophy was then taken outside for the crowd to view. Fabrice Ndzie Mezama paraded the trophy in the frontage of the air port for everybody to see and also to encourage other youths to copy their example.

This was followed by a huge applause from the crowd as many fans reached out their hands to have a touch of the trophy. The 2019 champions of Africa then boarded the 70-seater bus reserved for the team and headed for the Mansel Hotel in the Ngousso neighbourhood.

As they drove past neighbouring villages, school children and people of all walks of life lined the main road linking Nsimalen to Yaounde to cheer them. On hand to receive the Ca det Lions was the Governor of the Centre Region, Naseri Paul Bea, the Senior Divisional Officer of Mfoundi Division, Jean Claude Tsila and other top dignitaries.