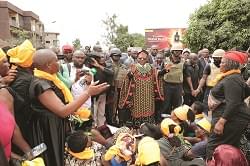 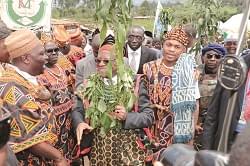 Audiences, working sessions with stakeholders prominent on the P.M’s agenda in a region that is thirsty for a return to peace.

Appointed Prime Minister, Head of Government on the strength of Presidential Decree No. 2019/001 of 04, January 2019, H.E Chief Joseph Dion Ngute is on his maiden working visit to the North West Region. Metropolitan Bamenda, capital of the region received the P.M, Head of Government yesterday May 9, 2019 on a visit that will stretch to Sunday May 12, 2019.

At a moment when the socio-political and security crisis is not helping matters in the region, Chief Joseph Dion Ngute is around with messages that encourage and promote a return to normalcy and living together.

This was evident when members of the North West and South West women’s Task Force, wailing and unhappy with killings, burnings and kidnapping of their husbands and children in the crisis were first to be received in audience by the Prime Minister. In effect, audiences and working sessions featured prominently on the agenda of the visiting Prime Minister, Head of Government.

Day one of the P.M’s outing in Bamenda featured sessions with administrative and security officers, elite and some elected officials. Ahead of the visit, the Director of Cabinet at the Prime Minister’s office; Balungeli Confiance Ebune encouraged the media to play a front role in reporting for peace and harmony. He said the Prime Minister, Head of Government is also around for a partnership with the media to work towards a return to normalcy.