In addition to other measures, a total of 55 trucks despatched from Yaounde on Thursday June 13 have arrived in the two regions for subsequent handing over to the needy.

For the past three years, the North West and South West Regions of the country have been experiencing a socio-political upheaval, a situation which has negatively affected daily activities and has caused the massive displacement of persons. Faced with the situation, an 18-month Emergency Humanitarian Assistance Plan of FCFA 12.7 billion initiated by the President of the Republic and placed under the supervision of the Minister of Territorial Administration was unveiled in Yaounde on Wednesday 20 June 2018 by the then Prime Minister, Philemon Yang.

The goal of the humanitarian relief fund is to help and protect internally displaced persons in both regions, facilitate the resumption of economic and agricultural activities, and promote togetherness. Within this framework therefore, the Minister of Territorial Administration, Paul Atanga Nji has been coordinating the constant distribution of assistance to the population with the most recent move being the opening of humanitarian coordination centres and commissioning their personnel in both regions early this month.

On Thursday June 13, 2019, the largest convoy 55 military and civilian loaded trucks left Yaounde and Douala for the affected regions, a gesture appreciated by the Ambassador, Head of the European Union Delegation to Cameroon, Hans-Peter Schadek, who praised the putting in place of coordination centres by the government. The relief materials consisting basic needs and household equipment which are already in the regions will be distributed to concerned persons as per divisions in each region under the guide of their humanitarian coordination centres.

The Governors of the North West and South West Regions are focal points of the respective centres in their regions to ensure aid offered by government and partners gets to the destined people. The Centre is res ponsible for coordinating all assistance to victims of the crisis in the North West and South West Regions, especially internally-displaced persons in addition to the injured, maimed, handicapped, orphaned, victims of destruction of property, host communities and Cameroonian refugees.

Going by the Minister of Territorial Administration, an estimated 70,000 persons are expected to benefit from the June 13 consignment with over 100,000 persons already having benefitted from previous humanitarian assistance. It should be recalled that government has since the beginning of the crisis in November 2016 taken some measures to respond to the concerns raised by lawyers and teachers of English expression. 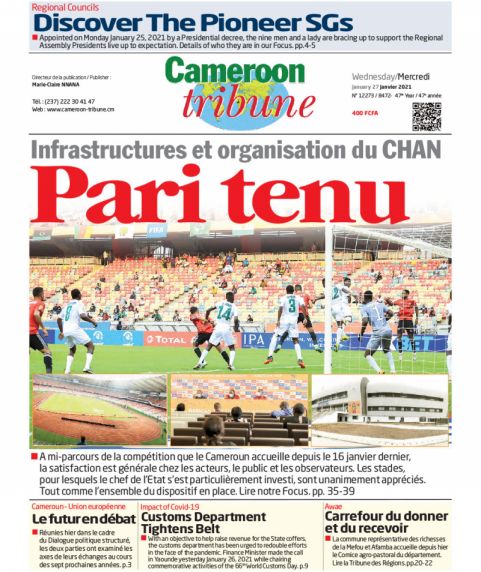