The health facility was handed over to the population as well as gifts to rural women and youths of the locality on Saturday, November 21, 2020.

The dilapidated and partially abandoned Dschang District Hospital which was created and constructed 117 years ago was on the spotlight over the weekend in the Menoua Division, West Region. The hospital has been given a face-lift by the First Lady’s charitable association-the Circle of Friends of Cameroon (CERAC). A ceremony for the official retrocession of the hospital, renovated and equipped by CERAC took place on November 21, 2020 at the Dschang ceremonial ground presided over by Dr Mrs Grace Dion Ngute, General Coordinator of CERAC and personal representative of the First Lady Mrs Chantal Biya.

Dr Mrs Grace Dion Ngute said for over 20 years CERAC has been reaching out to the needy through donation of gifts and construction of schools and hospitals. However, she admitted the case of the Dschang District Hospital was not an easy task for CERAC. The challenge was huge: it was a matter of restoring life and splendor to an old health facility. It took a synergy of actions, and at the end of the tireless efforts, Dr Mrs Grace Dion Ngute said CERAC administered intensive care, a shock therapy, and an appropriate care, to come out with the new Dschang District Hospital. She said the event was a perfect illustration of the idea that CERAC and its Founding President, Mrs Chantal Biya, have solidarity and happiness in sharing and to eradicate poverty, misery, suffering and diseases.

The Director of the Dschang District Hospital, Dr Michel Noubom said the Dschang District Hospital, presented a sorry state before CERAC came to its rescue. It has abandoned kitchen, degraded structures, dilapidating nature of the diabetology toilets… making access to quality health care difficult. “However, this nightmare is now of a distant past with CERAC’s renovation which has come to bring solutions to the thorny problem, giving our institution a new architectural look ...modern and beautiful,” Dr Noubom said.

On his part, the Mayor of Dschang Council, Jacquis Gabriel Kemleu on behalf of the population expressed gratitude to the First Lady for the gift which he said meets the expectations of the town which harbours a large university community. The health facility updated with a technical platform is programmed to become a University Hospital Center thus making the renovation timely. To the Mayor, the ceremony marked a big step in achieving this goal and the contribution of CERAC and its Founding President will be ‘decisive’.

CERAC’s delegation also went to Dschang with special gifts to rural women and youths of the Menoua Division. In total, 15 youth associations and 22 women associations benefitted. The West Regional President of the Cameroon Youth Council, Dominique Yatcheum on behalf of the beneficiaries expressed gratitude to the First Lady and took the commitment to make good use of the agricultural tools and diversified gifts to improve their farm output and income thereby their living conditions and those of their families. 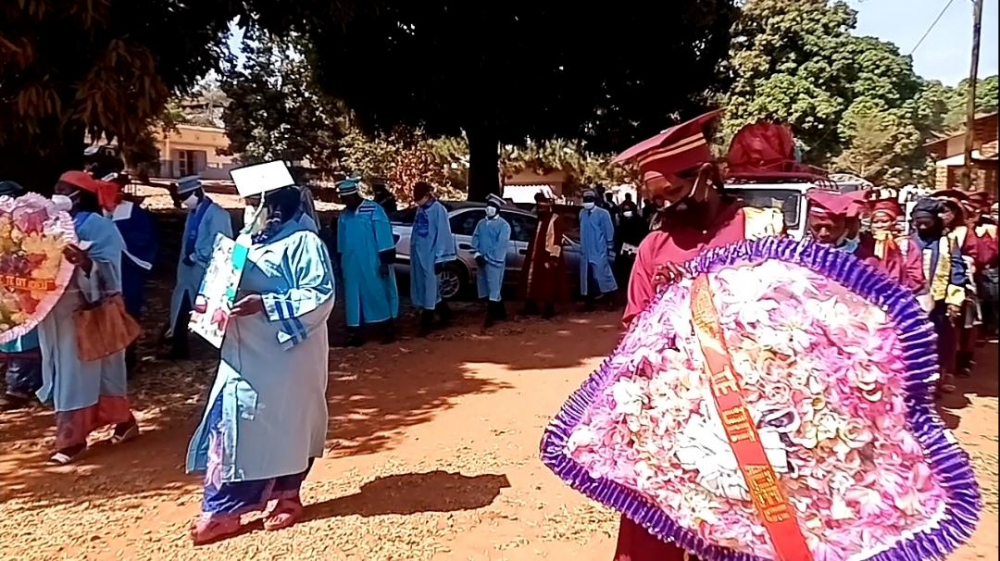