The Presidential Plan for the Reconstruction and Development of the North West and South West Regions aims to improve living conditions, consolidate national unity and social cohesion.

The Presidential Plan for the Reconstruction and Development of the North West and South West Regions is the fruit of one of the recommendations of the Major National Dialogue that took place in Yaounde from September 30- October 4, 2019.
The plan whose ultimate goal is to bring back peace and normalcy to the socio-political and security crisis-affected regions is placed under the supervision of the Prime Minister, Head of Government. It is aimed at realising projects focused on three priority areas that include restoring social cohesion, reconstruction and rehabilitation of basic infrastructure, and revitalising the local economy. For effective implementation, the Prime Minister, Joseph Dion Ngute on April 3, 2020 signed its organic framework. It is a component of the National Development Strategy prepared for a period of 10 years in order to reduce the effects of the crisis on the population and rebuild the economy of the North West and South West Regions. The initial cost of implementing the recovery phase plan for is  estimated at FCFA 89, 682,938, 100, with  a 10 percent participation of the State. Government’s implementing partner of the recovery phase is the United Nations Development Programme (UNDP).

Level of Implementation
The Steering Committee of the Presidential Plan for the Reconstruction and Development of the North West and South West Regions (PPRD) in the report of a study represented on September 16, 2021 indicates perceptible take off of socio-economic and cultural activities in the crisis-ridden regions since 2020.  The President of the Committee, the Director of the Prime Minister’s Cabinet, Balungeli Confiance Ebune said, “After the preliminary stages of sensitisation and updating of the losses recorded by the population and communities, the recovery phase has effectively started.”  Partners have already started coming with example being the signing of a financial agreement with Japan for an amount of FCFA 1.5 billion and FCFA 1.2 billion from the Cameroon private sector. There is also the commitment of the private sector to support the implementation of the Presidential Plan demonstrated in the meeting with the Prime Minister on May 18, 2021 in Douala.
The National Coordinator of PPRC, Minister Paul Tasong presented during a special plenary at the National Assembly on November 23, 2021 presented the Reconstruction Plan for the North West, South West and Far North Regions. For the North West and South West Regions, he gave concrete realisations.  On the recovery indicators concerning the banana sector in the South West Region, he  disclosed   that the banana production in the South West Region fell from 125,019 tonnes in 2016 to 16, 897 tonnes in 2019 due to complete cessation of activities by the Cameroon Development Corporation (CDC). Production recovered in 2020 to 21,132 tonnes and the first half of 2021 to almost 16, 272 tonnes.  In the educational sector, Minister Tasong said that in 2016 over 1.1 million pupils and students were in schools in the North West and South West Regions, the number dropped to 225,200 in 2019/2020 school year and increased to 600, 000 in the 2020/2021 academic year. In the health sector specifically in the North West Region, in 2016, there were 158 doctors in hospitals and health structures, dropped to 71 i... 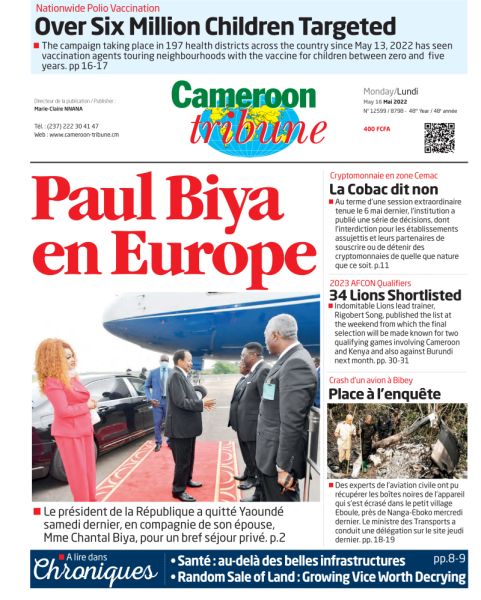