This was the major outcome of the Governor’s inspection to the various construction sites to host the competition in Douala.

The governor of the Littoral region in his capacity as chairman of the 2019 AFCON sites in Douala, yesterday paid an inspection visit to the various structures scheduled to host the African football jamboree in the economic capital next year to ascertain the level of progress of construction work on the various sports infrastructure and preparedness of hotels and hospitals for the tournament.

According to the project director of the Japoma stadium, Zeki Bozkurt, work on the main stadium is completed by fifty per cent while work on the complex in general is completed by about 35 per cent. The tribunes are almost complete and work now focuses on mechanical and electrical connections as well as plumbing, wall partitioning, air conditioning installations. He promised that work on the main field and the two training fields will be completed by the end of the year.

The same progress has been recorded on the Mbappe Leppe stadium which is supposed to serve as a training ground where work has been completed by 30 per cent. According to the director general of the construction company, Constant Moukoko, the work will be completed before December this year.

Piping on the pitch has been done and the first layer of gravel put already while the administrative block is beginning to emerge out of the ground. Renovation work on the reunification stadium in Bepanda is also completed by 60 per cent. The same progress has been registered at the Bonamoussadi stadium where the tribune, dressing room and administrative block is rising above the ground.

Same as the Douala international Airport where contracts have been awarded already and just waiting for renovation work to begin. Authorities however promised the renovation work will be done on time.

At the end of the visit, Governor Samuel Ivaha Diboua expressed satisfaction with the progress of work. He said the construction companies are now conscious about delays and are doing everything possible to finish on time.

He said despite the fact that he makes monthly inspection visits, there are focal points in each construction site who give updates about the progress of work. 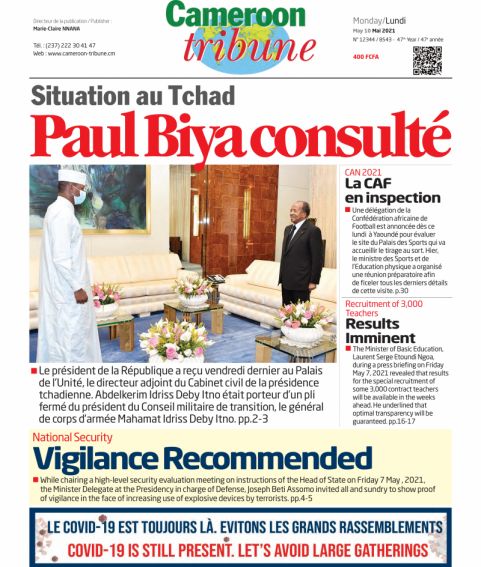