The modernisation is contained in presidential decree No. 2021/347 of 17 June 2021 to lay down conditions for the issuance of passports.

As from July 1, 2021 Cameroonians seeking ordinary, service and diplomatic passports would have to follow new conditions and procedures that will enable them have more modern passports. The Head of State, President Paul Biya in decree No. 2021/347 of 17 June 2021 to lay down conditions for the issuance of passports stated that the passport shall be an official identification document issued to Cameroonian nationals for travels abroad.” As to the form, “It shall be a machine-readable electronic biometric document with a chip embedded in its cover and compliant with the International Civil Aviation Organisation (ICAO) standard.” Procedures For Issuance According to Article 10 of the decree, the ordinary passport shall be issued by the Delegate General for National Security. Any Cameroonian requesting for the passport has to file an application to the Delegate General for National Security and its issuance shall be subject to payment of stamp duties as fixed by law. Prior to submitting the application, there must be online registration, save express waiver of the Delegate General for National Security.

A service passport on its part, shall be issued to any Cameroonian national not entitled to a diplomatic passport but assigned to a permanent mission abroad, or who, in the exercise of his duties, is called upon to frequently carry out missions abroad on behalf of the government. The service passport is issued by the Delegate General for National Security free of charge.

Concerning the diplomatic passport, the decree states that it is issued by the Ministry of External Relations, at the request of career diplomats or the competent authority, as applicable. Just as the service passport, it is issued free of charge.

The passports will serve as an instrument to project the image of Cameroon. Article 4 (12) of the decree specifies that pages 2 to 31 shall have a background of images depicting the history, culture and geography of Cameroon. As such, in them shall feature the images of Mount Cameroon, Statue of New Liberty, Lobe Falls, chimpanzees, pygmies, the National Museum, Reunification Monument, Fiftieth Anniversary Monument, Bana Chiefs Palace, Lake Oku, fantasia at the palace of the Lamido of Ngaoundere, hippopothemus, dome earthen huts, Waza Park and Rhumsiki Mountain.

Denial And Withdrawal Of Passports

The decree states that the passport shall be denied at the behest of the Legal Department in the event of the legal proceedings for felony or misdemeanour, for whoever has been sentenced by a court but has not yet served the sentence , whoever is released on parole before the end of their sentence. It is also denied to whoever owes the Treasury, where they are under requisition of the ministers in charge of finance, labour and social security; and in the event of national security breach. The passport would also have to be withdrawn in case the holder is involved in the issues just cited for denial. President Paul Biya in the decree has specified that passports in use at the date of signature of the decree of June 17, 2021 shall remain valid until their expiry dates. 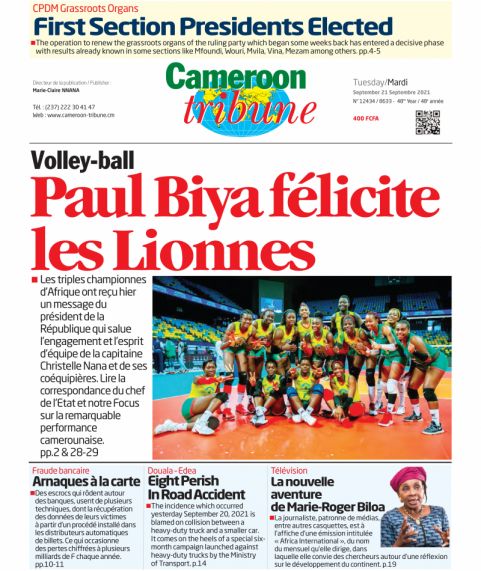